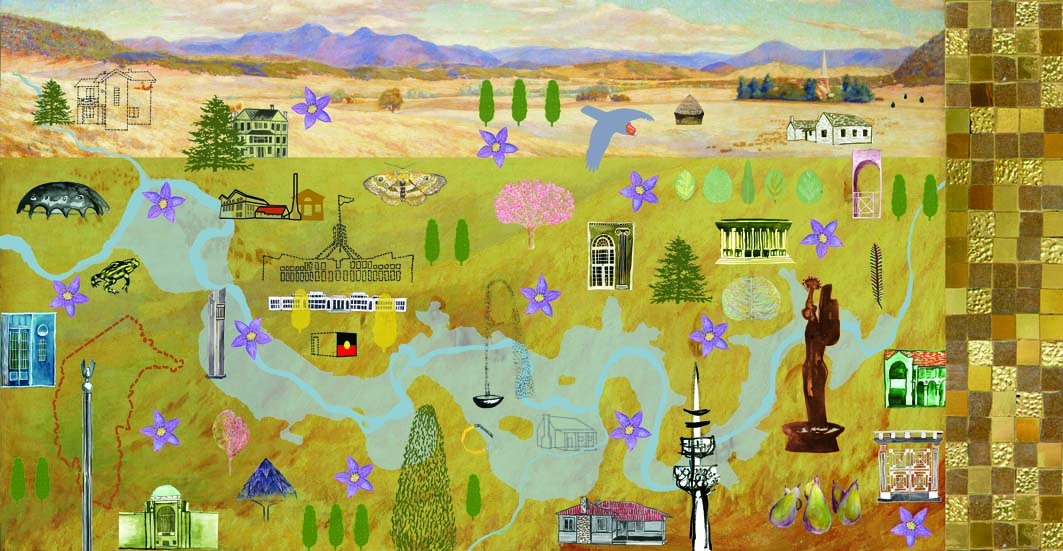 \ I was pleased to be asked to design the Canberra Centenary Tapestry. I had already started to gather materials while working on the ACT Heritage project this year, which focussed on the Gribble family home – the Valley Ruin in Gungahlin. The Gribbles land became part of the new Federal Capital Territory in 1913.

Along with Valerie Kirk, Dan Edwards and Al Munro I contributed to the Design Workshop as well as participating in three of the four introduction to tapestry workshops.

My way of working is to gather information from ACT libraries and institutions especially the ACT Heritage Library, National Capital Authority, Australian National Archives, the National Trust, Australian National Library, ANU Library, Canberra Museum and Gallery and the internet as well as my personal collections of Canberra memorabilia. I immerse myself in the subject area before I start to create the imagery.

I was particularly taken with Walter and Marion’s plans for the organic city sited within the surrounding mountains. I tried to capture Marion’s creativity by being true to my own artistic abilities – by paying respect to the beautiful drawings she made for the competition. Her reflections of buildings in the water I have used in the New Parliament House image as well as in one of the lost houses of the Molonglo in the lake. (great reference book by Linda Young)

In the National Capital Authority building in Canberra there is a large tapestry of one of Marion’s drawings. It is a straightforward interpretation. As the designer of a new tapestry I wanted to do something not so literal, which actually was representative of my design aesthetic.

I studied the paintings in the Competition in 1913 and was drawn to the third place winner’s colours in A.E Macdonald’s painting. I particularly like the distant mountains, which resonates for most Canberrans. It also shows Canberra with St Johns Church(where my parents got married),Blundells Cottage, the Molonglo river, a horseman and sheep. Mainly it looks empty. As this is owned by CMAG I asked their permission to use part of the top part painting to be interpreted by the weavers. CMAG happily gave permission after seeing a draft of the design with copyright instructions to be observed. I like the idea that the public could view the tapestry then hop over to CMAG to see the real painting passing the gold columns and Ethos on the way.

The placement of the Molonglo River and the lake is a strong design element I wanted to emphasise as part of the Griffin Plan. Longer term Canberrans remember the river and pre lake days. The lake is a very strong part of the city and it deserves a prominent spot. I have emphasised the parliamentary triangle in its actual location on the lake as it really is – with the houses of parliament, The American eagle, the War Memorial and Civic Centre/Vernon Circuitrepresented by roman cypress treesfollowing the layout of theGriffin Plan (although other persons decided on the placement of the War Memorial which was not in the Griffin plan), The Carillion is also geographically correct. As is the Powerhouse, Fitters Workshop and Telstra Tower. I did not set out to create a map so have not placed all buildings and images in their correct location. The lake is a design element more than anything and pointing out the Griffin triangle is enough I feel.

Lindsey Pryor’s book on Trees in Canberra provided a strong reference for the design element. The cover of his book shows the plantings in Canberra in its regular patterns, which I have used in the design with the placement of trees, both introduced and native. I also saw tourist posters, which emphasised Canberra as a place of trees, which we are all proud of.

So I was overlaying the 1913 landscape with Griffins Plans including the lake and river with the newly developed Canberra buildings and trees layered on top of what was originally there.

That is what I was trying to convey without literally drawing a map with all buildings in their correct location. Creatively it didn’t work and to me that was more important. In my designs for previous commissioned work my job is to create well – researched, relevant and aesthetically pleasing designs, which I feel I have followed in this one. Canberra has been layered from indigenous times to the present. The National Library sits now where Corkhills’ cottage was.

Overall as the tapestry designer I have used my creative design skills to respectfully and sincerely honour the Canberra I am proud to call home. It is multi - layered and has many stories to tell. Each person viewing it would add their own story and that is what community involvement is about.

I used the motif of the bluebell, the Canberra floral emblem, in a 5 - spot repeat to make the design elements cohesive. I would encourage individuality in the weaving of these just like the flowers themselves.

When warp that is accidently left uncovered during tapestry you are told you have lots of sheep. My first attempt at tapestry certainly showed this. The idea that the weavers are actually weaving the sheep appealed to my sense of fun in linking a tapestry term with the landscape.

My grandparents first came to live in Canberra in 1923, moving from Queanbyan. My grandfather, Thomas Henry Trevillian worked at the powerhouse and eventually became the boss. Therefore, I created the imagery of the Powerhouse. My Uncle Harry Trevillian started his apprenticeship in the Fitters Workshop before moving on to work in the powerhouse, Coupled with my strong association with Megalo I included the Fitters workshop regardless of the present outcome of the inquiry into its use. It is a beautiful building.

Trevillian family home (Top left hand side) for 50 years in Bass Gardens in Blandfordia with Cedar tree which relates to the Bass Gardens print owned by Legislative assembly. The artist’s thumbprint. Bass Gardens is laid out according to the Griffin Plan

Haystack(geographically correct). There are photos of Blundell's cottage with 3 haystacks beside it

Albert Hall - where my parents met at a dance. Community reference strong